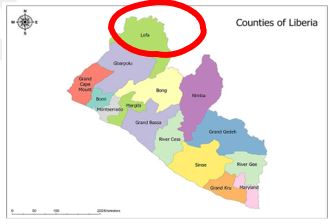 In REDRESS which focuses on reducing the burden of severe stigmatising skin diseases in Liberia) we prepared for our baseline study in Lofa, Margibi and Grand Gedeh Counties prior to the intervention rollout this summer. A major part of the preparations for the baseline study was to pilot and sense check the baseline methods and tools, such as supervision tools for health workers and basic psychological support job aids, which will be used by the Ministry of  Health as part of the intervention.

On March 21, 2022, two teams departed Monrovia to sense check and pilot the REDRESS tools in Kolahun District, Lofa County. This was a wonderful experience and we want to share our learning from conducting operational research for projects like REDRESS. However, before detailing our experience with the pilot and sense checking activities, we would like to first introduce you to Lofa and answer the question, why was Lofa selected and considered the best site for policy testing before scale-up.

Lofa county is the fifth largest county in Liberia located in the northern part of the country and about 595 Kilometres away from Monrovia. It shares borders with two countries – Republic of Guinea and The Republic of Sierra Leone. The county is culturally diverse and occupied by many tribal groups and associations.  The major tribal groups include the Lorma, Kissi, Gbandi, Kpelleh, Mandingo. This tribal diversity makes Lofa perfect for policy testing before scaling out in the rest of the country. Beyond this, Lofa is currently piloting the Revolving Drug Fund (RDF) as part of the plan to introduce cost-sharing in the Liberian Health System. Lofa is also one of 5 Liberian counties that have been piloting the Integrated Case Management program for the management of Neglected Tropical Diseases (NTDs) in Liberia.

Our pilot and sense checking experience in Kolahun, Lofa County

Our team was assigned to rural Kolahun District, working between Bolahun Health Center and Popalahun Clinic. The pilot and sense check went well for all the relevant tools and discussion. However, we would like to share our experiences, challenges and reflections regarding participant recruitment. On Day 1, our team had to politely decline two affected persons who had been selected to participate in the feasibility of peer support group discussion because they were minors and did not fulfil our participant criteria.

Upon the arrival of our team, we were introduced to the participant for the interview. However, through rapport building on arrival, we discovered that our participant did not want to participate but had felt persuaded to do so due to the role of the county health team staff who had recruited them. The participant graced our arrival, and we did the necessary formalities including seeking consent and sharing information about the research prior to the pilot. However, during the interview, we detected that the participant was not forthcoming in their answers. Our team of field researchers were all experienced researchers with more than seven years of experiences in the business of data collection and research and we noticed something wrong. Therefore, we paused the interview and introduced conversation to build a rapport with the participant. This revealed that the participant did not want to participate in the interview because they wanted to avoid stigma. We stopped the interview immediately at this point. This presented an ethical dilemma for us and something which we feel is important to reflect on as a team as it highlighted how when inadvertently missed underlying power dynamics can influence participant recruitment.

On reflection, this experience demonstrated the importance  of establishing a comfortable space and building trust and rapport with participants though pre-interview informal conversations with participants to ensure that informed consent is fully obtained and that power dynamics are adequately considered. This is particularly critical with participants who are affected by severe stigmatising skin disease and who struggle with stigma and discrimination. It is important to be sensitive, and be aware of body language especially when working with vulnerable groups. This also highlighted how briefing and ongoing dialogue with those involved in supporting recruitment and encouraging them to reflect on their own power and positionality is critical. We will build on these learnings as we move forward in REDRESS.

Georgina V. K. Zawolo – previously served as Social Science Lead for the COUNTDOWN Liberia Project and she joined REDRESS as the Evaluation and Information Coordinator.