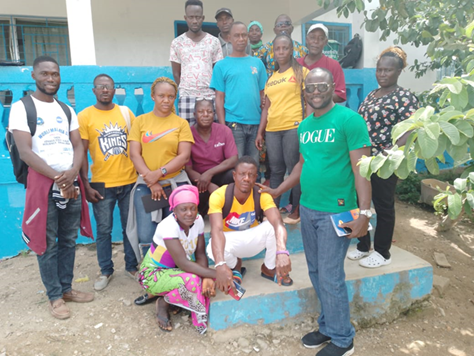 The REDRESS baseline activities consisted of using multiple qualitative and quantitative methods to collect data from health workers, traditional healers, community members and persons affected by severe stigmatizing skin diseases (SSSDs). This reflection focuses on our experience of using quantitative methods to collect data. For our reflections based on our qualitative data collection, please follow this link.

We are all based in Monrovia, the capital city of Liberia and travelled to our REDRESS intervention counties – Grand Gedeh, Lofa and Margibi, for the data collection. Here we Recruited 8 peer researchers/county data collectors beforehand in these counties to team up with each of us.

We had one day pre-data collection training with our peer researchers and were supported remotely by our UK research team. The training covered research orientation such as what data to collect and the sample sizes. We discussed and agreed on how to implement the sampling in practice, and made sure we interpreted each question in the same way. We also had practice sessions with REDCap. Data collection instructions for each survey were developed, printed and allocated to each data collection team member.

We conducted community entry meetings with each county health team right after we arrived at the counties. The Lofa team received a big pineapple as a welcome gift. What a big surprise and a nice gesture!

The NTD focal persons and District Health Officers were quite instrumental in facilitating our baseline data collection. They informed the health facilities and helped locate some facilities. The majority of the health facilities were very receptive. We, on behalf of REDRESS, also communicated with hospitals beforehand for our data collection. We emailed medical directors indicating the purpose of the baseline to get permission to visit these facilities.

Working with peer researchers from our intervention counties

It was good working with our peer researchers during the baseline study. Locating communities and coordinating interview’s appointment with community health assistants (CHAs)/community health promoters (CHPs) and people affected were very easy, because our peer researchers knew every community and every CHAs/CHPs in our assigned district. They even spoke the local languages which was even better because when we needed a translator, and we had them to translate.

Data collection for the health facility survey and the health worker survey went smoothly, with the team able to collect this data as anticipated in all counties. Health facilities as a whole and health workers were responsive to our data collection. One challenge encountered was that we didn’t identify as many SSSD patients as we wished in the NTD case management health facility ledgers.  The reasons for this were complicated and we reflect on these methods further in the following paragraphs.

At health facilities where NTD case management health facility ledger review was required, the ledgers were made available, and the officers in charge/their designees were very supportive in reviewing and sourcing out the required data. The main challenge experienced was that at most facilities, the NTD case management ledgers and the laboratory ledgers are mainly empty. Based on our communication with health workers at these health facilities, this was mainly due to a lack of patients having sought care at these health facilities. We will keep exploring other potential reasons through REDRESS, particularly the need for increased skin NTD service availability at health facility level and awareness about the services at the community level.

In Liberia, health centres should have effective laboratories and conduct surgeries. However, most health centers in Margibi county are not currently providing these services. Patients are either treated clinically or sent to other facilities to do laboratory tests.

In terms of the availability and accessibility of the health worker participants, we were able to interview all previously identified participants, even if they were not at the facilities upon the first visit, for reasons such as training. At times this required that we followed up where they were located and then interviewed these participants, who were all very responsive. Community health workers like the CHAs/CHPs needed a bit more time to understand the survey, as compared with health facility workers. The only challenge we encountered with this method was the long distances that we needed to drive from one part of the district to another, to ensure that we included participants from the wide range of facilities identified, which burned a lot of fuel.

Across all three counties, we learned that health facilities commonly experience a lack of medicines to treat SSSD patients from both health workers and patients. For example, in Grand Gedeh, CHAs/CHPs made four referrals to hospitals, but patients did not want to go as they were aware no medication was available at the hospital. We reflected on the need to strengthen supply chain (a key focus of REDRESS) to ensure making treatments available would be just as essential as providing training to deliver skin NTD care. This would give patients the confidence to seek quality, effective care.

It was very challenging to identify patients for the survey. We expanded our checking of NTD case management ledgers to include other ledgers at health facilities, which helped us to find a few more patients. The district health team and the outreach team of health facilities were helpful in locating patients in communities. We will continue to enrol patients in our survey as part of a rolling baseline.

Identifying patients in the NTDs ledger at health facilities were a serious challenge. Majority of the facility’s NTDs ledgers were without data, few cases were found in above Five ledgers, Master Registers, and Surgical Register at health facilities. However, locating patients were also a major challenge. Most patients have relocated to other communities or have traveled to nearby countries seeking care. Long walking conditions, team members had to walk 3-4 hours to locate patients due to bad roads network. We also used motorcycles to reached patients wherever possible. (Colleen)

We had weekly baseline activities catch-up sessions with our UK team and ad-hoc communications for problem-solving via WhatsApp which was helpful to address challenges such as using REDCap to collect data and data uploading. It also created a platform for our group reflections on how the surveys went and what would be good to do for our intervention preparation and roll-out.  As we reflected on the baseline quantitative data collection methods, we identified learning to potentially strengthen the roll-out of the REDRESS intervention phase. The learning was: to continue working with peer researchers/county data collectors; to provide support and training to health workers, to keep exploring reasons for patients not seeking healthcare at health facilities, to strengthen supply chain and to continue to enrol patients in our survey as part of a rolling baseline.

With acknowledgement and thanks to our peer researchers: