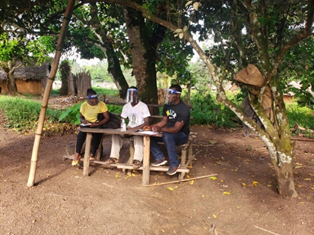 As I reflect on my diary of things that caught my interest during the 34 days of field data collection in Grand Gedeh County, an experience like nothing I had before, I would like to share my excitement about a local innovation I have witnessed in a small place called Gbarbo Town.

On the 29th of October 2020, Grand Gedeh Team three (3) led by John Solunta Smith, Jr., a Research Fellow at REDRESS – Health Financing team, departed Monrovia for field data collection in Tichen and Cavalla Districts of Grand Gedeh County, Liberia. Although Grand Gedeh County has six (6) Health Districts, Tichen and Cavalla districts are the first and second largest according to the available data sources. Our team was made up of Amanda, a data collector based in the county, and Jeremiah, the NTDs Focus Person, who was responsible for setting up meetings with our interviewees and coordination of the mission activities.

Prior to my joining REDRESS, as an economist, I was heavily leaning towards quantitative research methods, with limited skills and familiarity in the application of other methods, such as qualitative interviews. After one year of training, coaching and mentoring in REDRESS, I now understand that numbers alone cannot capture the rich thoughts and experiences of our research participants. I am grateful to Dr. Karin Diaconu, Professor Sophie Witter of the Queen Margaret University, Edinburgh and Dr. Laura Dean, Professor Sally Theobald, and others of the Liverpool School of Tropical Medicine and others for the mentorship and coaching they gave me over a period of one year. I am also thankful to an admire colleague Jennifer Falconer who started this journey with me.

Moving Back to my Grand Gedeh County Experience

Before detailing my Grand Gedeh experience as the subject of this article suggests, I’d like to share with my readers five (5) things to know about Grand Gedeh County.

I should also mention that this trip gave me the opportunity to visit Grand Gedeh County for the fourth time as a Development Practitioner.

At the end of November 2020, our research team visited a major town to conduct an interview with a Community Health Assistant (CHA) as one of our many informants selected to be interviewed.The CHA we spoke to is a reservoir of knowledge for the community. His role involves providing intellectual guidance for the youth and providing first aid expertise for sick community dwellers. The challenges he helped us understand include linking our research team with influential community stakeholders and meeting patients and people who have recovered from SSSDs.  Also, he along with others helped the town to set aside funds to be used by suspected SSSDs patients to transport them to the nearer health facility and provide them with a minimum cash that could be used for non-medical caring activities.  How is the town budget funded? And what are the revenue streams? These were the questions posted to him after hearing this new community innovation.

The town’s budget is managed by a prominent woman in her 60s. She was selected to manage the town budget on consensus. The town budget is used for both public and private goods such as repairing of the community hand pump and toilets, maintenance of the Palava-hut, and undertaking community initiatives such as roadside brushing and cleaning of the town environment.

A major event, two years ago, occurred when the town lost a strong farmer who was regarded as one of the highest contributors to the town’s budget. He was suspected of having hydrocele and was referred to Martha Tubman referral hospital for caring. The suspected patient did not make it to go to the referral hospital which is about an hour drive due to the lack of transportation and fear that he will have no money to cover his food needs. He was kept in his room until the complication with hydrocele resulted in rupture thus leading to his death. Since that time, the town council and the management team decided to provide support for its people and to take care of their medical needs since they are the main contributors to the town revenue. The management team believed that a healthy population could greatly improve town’s funds through their contributions.

The results of that unwritten policy, according to available data shows 10 people suspected of SSSDs muster the courage to follow the referral processes where 7 people have been diagnosed or confirmed and provided with care. Most of whom have returned to the town and are involved in their usual farming activities.

The town is endowed with a big river and huge forest assets which are friendly environment to the prevalence of BU and hydrocele among other cases. Stories like these are not unique in the community, for example, at the Martha Tubman hospital, nurses and health workers were also using informal finances to provide care for SSSDs and other patients.  Available data shows that Nurses and Health Care Professionals usually conduct mini rallies to collect money among themselves and other visiting the hospital to support patients who have been abandoned by family members and caretakers at the hospital. As narrated by one of our participants, their rallies have been able to support to recovery two (2) BU patients and more than seven (7) other patients who suffered from many different health conditions on her ward at the hospital.

About the Author: John Solunta Smith, Jr., (Ph.D.) is a Research Fellow on Health Financing at UL-PIRE/ REDRESS Project.